Why're You Hitting Yourself?

Why're You Hitting Yourself?

While fighting over the remote control, Adam reaches a defining moment in his relationship with Barry when they accidentally discover a "channel between the channels" that appears on television. Will anyone else find out? Meanwhile, Beverly grows tired of seeing so many women with Pops and soon meddles in her father's dating life. 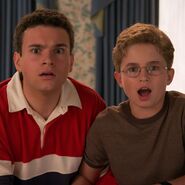