Lew Schneider
The Wedding Singer is the eleventh episode of the sixth season of The Goldbergs, and the one hundred twenty-eighth episode overall. It aired on January 9, 2019.

Barry and Lainey's wedding date is right around the corner, and Beverly is in her element as she tries to make everything perfect for her schmoopie's big day. Geoff is concerned about Adam's shortcomings as a wedding videographer. Meanwhile, Barry begins to have second thoughts. 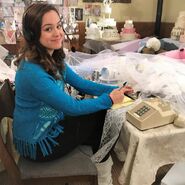