The Rose-Kissy Thing is the seventh episode of the ninth season of The Goldbergs, and the one hundred ninety-second episode overall. It aired on November 3, 2021.

Senior Night is upon William Penn Academy, and Beverly soon discovers she is missing out on the ceremonial adoration presented to mothers with athletic children. Much to Adam's embarrassment, Beverly pushes for her moment to shine with a kiss and a rose and encourages Principal Ball to establish a Non-Athlete Senior Night.  As Adam attempts to foil his mother’s plans, Erica finds herself lacking any interested friends to appoint "pre-wedding fun captain." Reluctantly, she engages her eager "sister-in-law to be" Joanne, who inadvertently doesn’t meet expectations but ultimately proves herself worthy of being called sister. 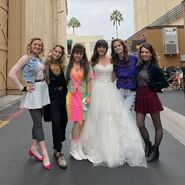