The Kissing Bandits is the twelfth episode of the ninth season of The Goldbergs, and the one hundred ninety-seventh episode overall. It aired on January 19, 2022.

Upon their return home from college orientation, Adam and Brea each confess a secret that could affect the future of their relationship. Meanwhile, Barry and Beverly openly admit their love of ice-dancing and explore their shared passion together.

· The title refers to the 1943 film The Kissing Bandit.

· The title also refers to the episode of Happy Days The Kissing Bandit. 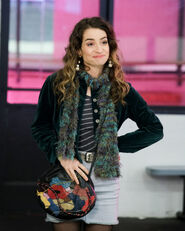