Fred Savage
The Beverly Goldberg Cookbook is the eighteenth episode of the sixth season of The Goldbergs, and the one hundred thirty-fifth episode overall. It aired on March 13, 2019.

Beverly and Adam team up to do a mother-son cooking show on public access television; and when Barry ruins the one college letter of recommendation he is able to get, Murray must step in to help. 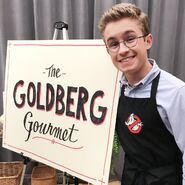