Jeff Garlin
“Stop Being a Moron!”

Murray Goldberg (born September 25, 1940) is the husband of Beverly Goldberg and father of Barry, Adam and Erica Goldberg. He is portrayed by Jeff Garlin.

Murray seems to often go along with whatever his wife Beverly says, even when he is not paying the slightest bit of attention and has no idea what she is saying.

He is shown as being strict and tough on his children, but really does care for them deep down.

He also makes sure they fend for themselves and makes a point to always tell them no whenever they ask him for something, because he believes that's what makes a well-respected father: showing tough love to them, especially with his daughter Erica (who is secretly his favorite child).

He is often in his chair in front of the TV, without his pants on and usually wears tighty-whities. In various episodes, Murray is ill-tempered and doesn't like anything that is expensive.

Murray was believed to be a graduate of Penn State, but in "The Dynamic Duo", we learn that he never actually graduated because he fell one credit short. It's never mentioned where Murray went to school before Penn State, but it seems likely that he might've attended William Penn Academy as his children do.

Prior to marrying Beverly, Murray was in love with and engaged to be married to a woman named Anita. He stopped dating her due to unknown reasons.

Murray reclining in his favorite chair

Fan-art of Murray sitting in his chair, with the phrase "Don't be a Moron!" above it 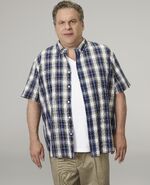 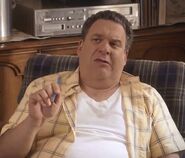