Mr. Ships Ahoy is the thirteenth episode of the eighth season of The Goldbergs, and the one hundred seventy-sixth episode overall. It aired on March 3, 2021.

As William Penn's new Quaker Warden, Beverly is thrilled to have co-workers for the first time and sets out to make them all love her. To her dismay, it's more difficult to win them over than she anticipated, as her reputation of being a difficult school parent precedes her. Meanwhile, Geoff competes in the "Mr. Ships Ahoy" beauty pageant to prove to Erica that he can be seen as desirable by other women. 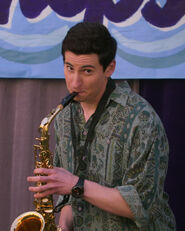