After Barry wants money to buy an expensive pair of basketball shoes, Murray tells him he must earn the money himself and suggests he come to work at the Ottoman Empire. Initially less than thrilled, Barry soon finds being a salesman to be quite different from what he expected. Meanwhile, Beverly won't allow Adam to see the horror film Poltergeist as she believes it is too scary for him, so he hatches a plan to go see it with Pops behind her back. Unfortunately, the plan begins to fall apart and Beverly is proven correct when Adam finds himself too afraid to sleep at night. 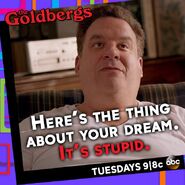