Lea Thompson
Major League’d is the fourteenth episode of the sixth season of The Goldbergs, and the one hundred thirty-first episode overall. It premiered on January 30, 2019.

Adam and his friends are recruited to the William Penn Academy baseball team. Adam is initially terrified, but soon catches on to Principal Ball's master plan. Also, a short-sighted Barry is in denial about his pitching skills. Meanwhile, Geoff's dad interferes in his relationship with Erica. 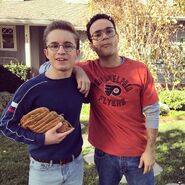