Mad-Man Schwartz (by the JTP)

Shall We Play a Game?
Dr. Barry (Schooled)

Geoffrey Todd "Geoff" Schwartz (born April 14, 1969) is the husband of Erica Goldberg, best friend of Barry Goldberg and member of the JTP. He is a recurring character in Season 1-4 and a main character in Season 5-9 of The Goldbergs. He is portrayed by Sam Lerner.

Originally, Geoff had a huge crush on Erica and had since the second grade. He tried multiple times to get her to like him, and she found this annoying, and as a result never reciprocated his feelings despite all of his efforts. She just wanted to remain friends, though she did have a bit of compassion for him. Despite the fact that she had brutally rejected him several times and was adamant about not dating him, Geoff makes a mixtape for Erica in Have a Summer. She initially sees this as desperate and pathetic, but later comes to find it sweet and charming and realizes that she does in fact have feelings for him. Unfortunately, when she decides to tell him about her feelings, she learns that Geoff has finally moved on, and is now dating Evelyn Silver.

During the first two thirds of Season 4, Erica is obsessed with Geoff, though he is completely oblivious to her feelings (unlike Evy, who sees her as a threat). Nonetheless, Geoff is still very friendly to Erica during this time, regardless of the fact that Erica often humiliates herself due to her feelings, such as in George! George Glass! or Stevie King.

In So Swayze It's Crazy, Geoff finds out that Erica likes him, and after initial shock and confusion the two embrace and finally get together. Yet in The Kara-te Kid, Evy catches them kissing and is shown to be seriously hurt by what has happened. Erica and Geoff both feel bad for sneaking around and terminate their brief relationship so they can take things slow, devastating Erica. However, at the school prom in A Night to Remember, after trying to be each other's date for prom, they realize their attraction to one another and officially begin dating again, with the timing being right for the first time.

Due to Erica moving to college in Season 5, she and Geoff end up trying a long-distance relationship, and despite initial issues (such as in Goldberg on the Goldbergs) they are able to stay together.

In Vacation, Erica is preparing to return to college and Geoff tells her that he wants to tell her something important when the family returns from vacation, and Erica is worried that he is going to break up with her. She is relieved to find out that he just wanted to tell her that he has decided to take a gap year and won't be attending college when she does. However, after a summer of following the Grateful Dead and starting a failed business venture ("Food in a Geoffy"), he decides to enroll in college full time and secretly moves into Erica's dorm room.

Like Barry, Geoff is a member of the JTP. They are shown to have somewhat of a brotherly bond with one another, and Geoff has been shown to care about Barry in many episodes. In Dinner with the Goldbergs, Geoff gets fed up with the family and yells at Barry, as well as the other Goldbergs.

Throughout Season 4 of the show, Evelyn and Geoff are dating and seem to be in love; however, Geoff still has feelings for Erica as well. Evelyn and Geoff are a close couple; however, Evelyn seems to be extremely clingy and almost smothering towards Geoff throughout their relationship. Their relationship ends when Evelyn finds out about Geoff cheating on her with Erica after she catches them kissing. Evelyn tends to be seen as an enemy towards Erica, as she finds her as a threat.

Geoff formerly attended William Penn Academy. In season 7, he enrolls full time at the Pennsylvania College of the East. 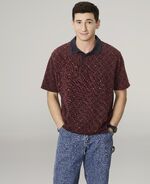