The Goldbergs and Schooled Wiki
Register
Don't have an account?
Sign In
Advertisement
in: Episodes, Season 7, Season 7 Episodes, A to Z

Nora Kirkpatrick
Game Night is the twelfth episode of the seventh season of The Goldbergs, and the one hundred fifty-second episode overall. It aired on January 22, 2020.

At the Goldbergs' family game night, Geoff struggles to keep secret from Beverly the fact that he and Erica are living together. Meanwhile, hoping to get close to the most popular girl at school, Adam seeks the advice of William Penn's cool new guidance counselor. 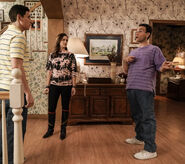