Schmoopie (by Beverly)
Big E (Formerly in the JTP)
Riki Gold (former stage name)
'Ca (herself, in response to "Ren")

Erica Dorothy Goldberg (born August 18, 1967) is the oldest Goldberg child and a main character in The Goldbergs. She is portrayed by Hayley Orrantia.

Erica is sarcastic and can be a bit bad-tempered and sometimes doesn't get along with her brothers. She is smart and musically gifted.

Erica attended William Penn Academy and originally started college at D.C. School of the Arts at the beginning of the fifth season, but dropped out at the end of the season to form a band with Lainey and Valley Erica, her college roommate, which they aptly decided to call "The Dropouts". Unfortunately, the band ended up going nowhere, and Erica decided to go back to school and get her life back on track. Since Season 7, she is a Sophomore currently as of season 8 at Pennsylvania College of the East, alongside her brother Barry.

From seasons 1-4, Erica was a cashier at Gimbel's. She had a short stint in Season 6 as the lead singer for the band she and Lainey formed with Valley Erica, The Dropouts.

"Adam, what the hell?! Get out or I'm gonna crimp your face! Mom!" - Erica's first line in the series. 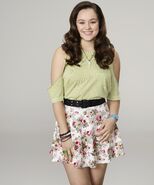