Adam Frederick Goldberg is the main protagonist and narrator of The Goldbergs.

The character is based on the real Adam F. Goldberg. He is the youngest child of Murray and Beverly Goldberg and the brother of Erica and Barry Goldberg. He is also clearly Beverly's favorite child over Barry and Erica. Patton Oswalt voices present-day Adam as the narrator with Sean Giambrone portraying the adolescent Adam.

Adam is a nerdy high-schooler who likes making and watching movies. He likes Ghostbusters, E.T., The Princess Bride, Star Wars and The Goonies in particular.

Barry and Adam like a lot of the same things like the Beastie Boys and Ferris Bueller's Day Off. However, Barry is always teasing Adam for doing things he considers "nerdy", such as always filming and playing with action figures.

As revealed in one episode, Adam and his sister used to be very close when they were young and started a detective agency where they often solved mysteries together.

As of Season 9, he is a William Penn Academy student. Adam's dream is to become a director/producer. In "The Spencer's Gift", he started working at an arcade.

Dana Caldwell was Adam's neighbor and first crush. He met her in the episode "The Ring" and tried to woo her by holding a boom box outside her window like the character in the movie Say Anything. Later, in the episode "You Opened the Door", Adam and Dana have their first school dance. In "You're Not Invited", he receives his first kiss from her when he dies for her in a game of laser tag. However, in "Goldbergs Feel Hard" it is revealed that Dana is moving to Seattle, and in "Weird Al", they decide to break up after realizing how much they have grown apart. She returns in "Dana's Back" after her grandmother passes away and her family moves back to Jenkintown, and makes clear to Adam that she just wants to be friends.

Jackie Geary is Adam's girlfriend in seasons 4, 5 and 6. When he met her, he thought she was awesome and liked her because she was a nerd, just like him.

Brea Bee is Adam's current girlfriend. The two became friends after partnering together for a lab assignment and discovering they have a lot of mutual interests.

Adam attended William Penn Academy from seasons 1-9 and as of the season 9 finale has graduated. 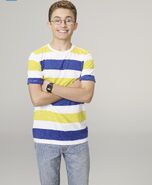 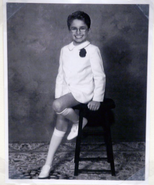