The Goldbergs and Schooled Wiki
Register
Don't have an account?
Sign In
Advertisement
in: Episodes, Season 3, Season 3 Episodes,
and 3 more

David Katzenberg
A Chorus Lie is the second episode of the third season of The Goldbergs, and the forty-ninth episode overall. It aired on September 30, 2015.

As Adam enters puberty, Beverly does everything in her power to help him through this awkward phase, including his crackling singing voice. So when Adam gets a lead role in the school musical, Beverly convinces Ms. Cinoman to have Adam lip sync - just like the musical group Milli Vanilli - while performing in "A Chorus Line." Meanwhile, Murray inspires Erica to go to the Homecoming Dance with JTP member Geoff Schwartz. 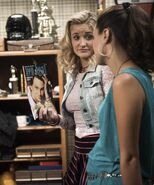