The Goldbergs and Schooled Wiki
Register
Don't have an account?
Sign In
Advertisement
in: Episodes, Season 3, Season 3 Episodes,
and 3 more

12 Tapes for a Penny

12 Tapes for a Penny

David Katzenberg
12 Tapes for a Penny is the eighteenth episode of the third season of The Goldbergs, and the sixty-fifth episode overall. It aired on March 16, 2016.

Adam schemes to get as many cassette tapes as possible from a mail-order music club, but when Beverly gets wind of this scam she points the blame at Erica. Meanwhile, Barry is determined to get closer to Lainey's dad, Bill, even though it's an uphill battle. 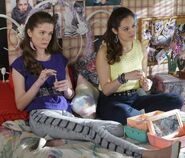